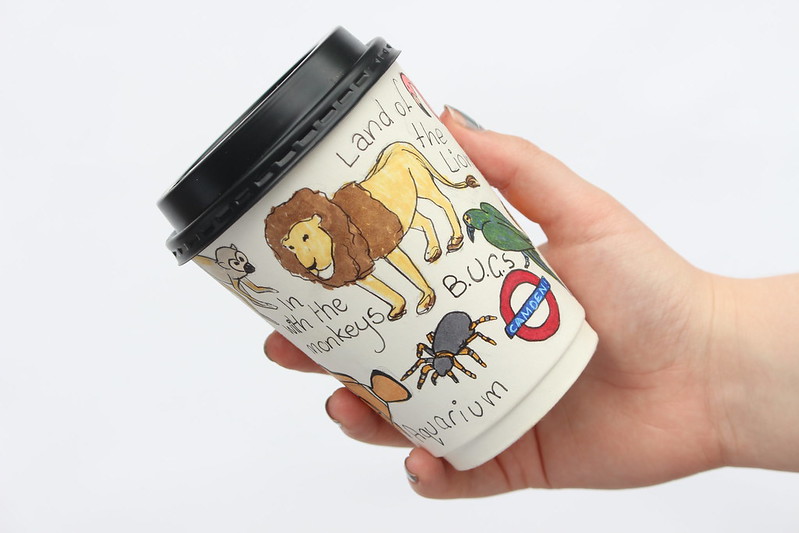 I’m surprisingly proud of this project. I think the final prints and sculptures came out really professionally. This is something I would be proud to place in my portfolio. Mainly because it is interestingly beautiful. I love the wire technique and how when paper wraps around the wire in the print it prints everything, not just the lines that we see when we look at the wire, but the curves and twists in the finishing also. I love the contrast between the plain emboss and the inked emboss. Personally I prefer the plain because I feel the lack of a black definition helps the paper to continue representing an air of fragility about the animal. 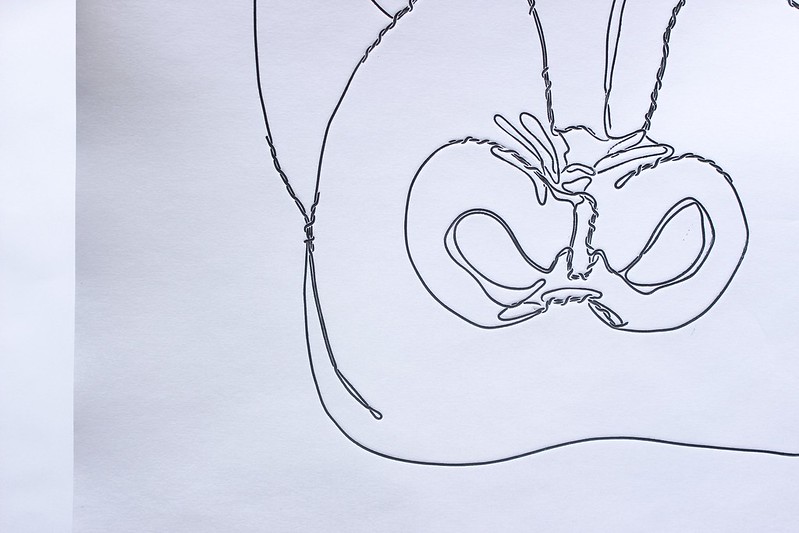 Taking this project further, I would represent it as a hanging instillation. One you could walk through to appreciate both sides of the prints and sculptures. Arranged in rows of wire, then embossed paper, then the inked print. With a column for each creature. And carefully lit to create shadows of the animals. 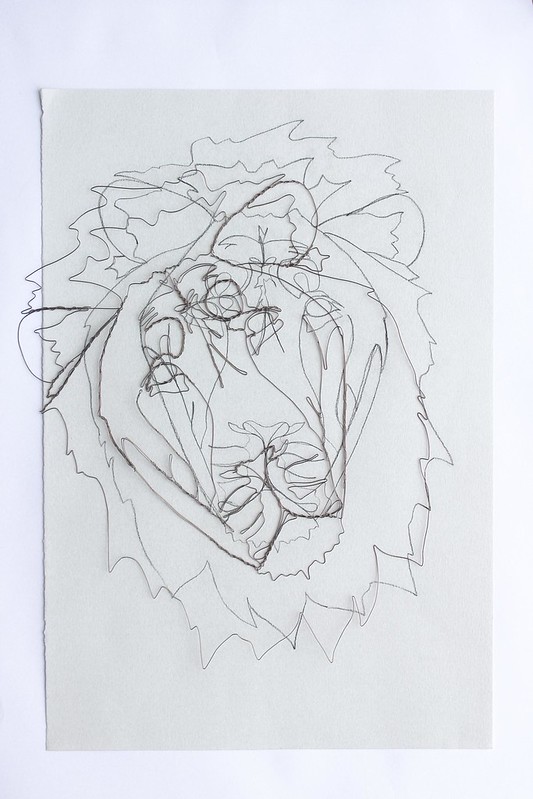 I thought about having a wire sculpture instillation where the wires are lit in such a way that the shadows represent the animals daily journey in the zoo over 24hours and how much they move, how fast etc… in shadows, so there’s a restricted space movement for the lights to work with, like the animals restrictions in the zoo. This would involve studying the animals movements over a 24 hour period, however, if I wanted this to be a fair representation, I would have to monitor them over a longer period of time and then take the avarage.

I used a wire called gunmetal wire to convey how having a fence around you and being kept in a small space like that has in a way, made the strong hunting animals weak with having a constant food source and no threat from the food chain, all because the were hunted in the first place, and these Zoo’s are trying to protect them. A twisted concept that fits the process of wire sculpture, twisting. 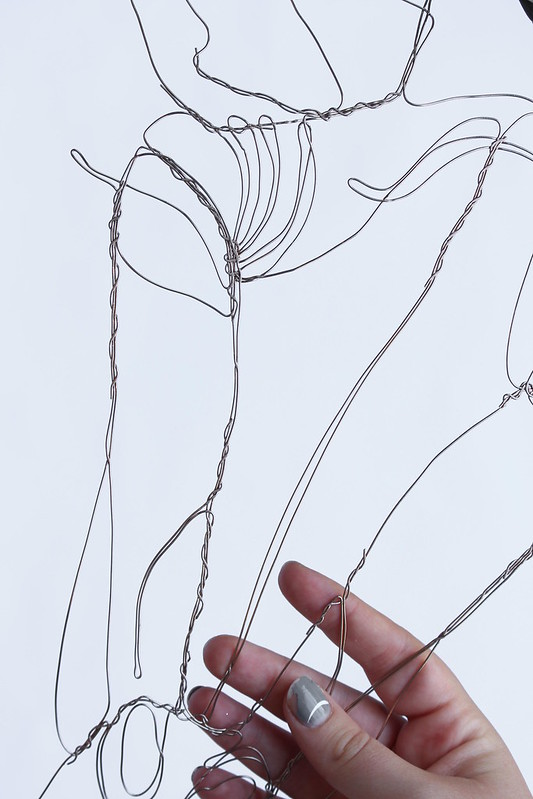 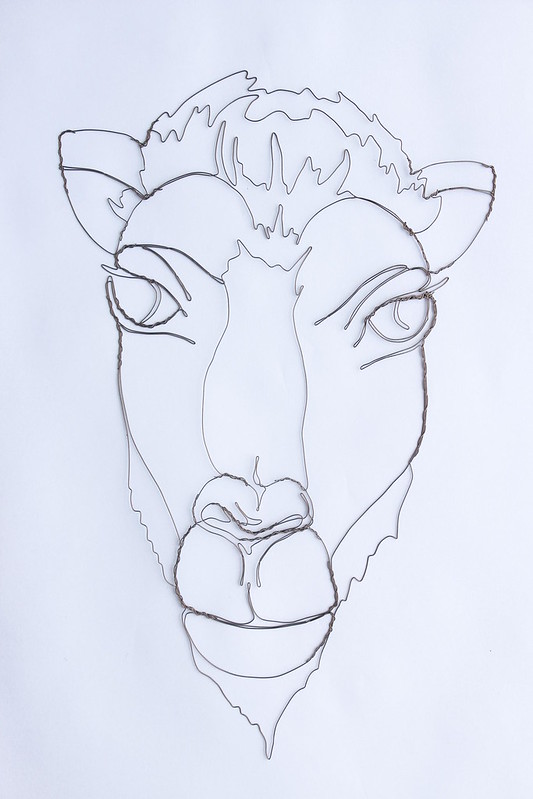 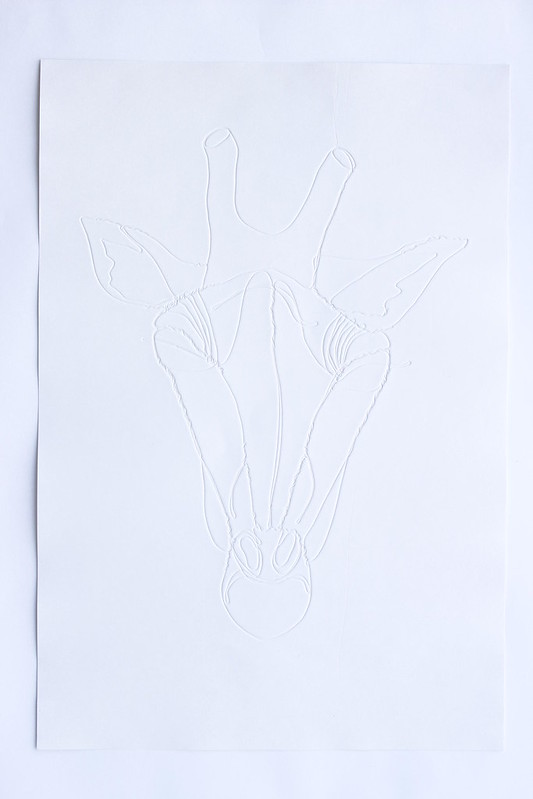 Overall this project has been enjoyable. I’ve loved all of the exploring and creating, although drawing 400+ images (however fast I drew them) was a mammoth task. I found the urge to refine the lines and shapes hard to resist. I don’t finish sketches often, unless I’ve decided they’re important to final pieces, but I do like my work, once it is finished, to look neat and polished.

This project has been more free to expression, just as the Barbican allows people to express themselves through their lives there. I’ve found lately that my work is quite related to expression, probably derived from an early love of impressionism. I get so much enjoyment from that 19th century art movement, the excitement of new technologies and paint you could take outside. Eventhough their paintings are a lot more precise, the same fast brush strokes and spontanious doccumentation of the surroundings apply to this project.

The things I would improve upon would be to extend the animation by including more of the plantation from the Barbican. I only partly experimented drawing the greenery of the place in my sketch book and decided against including it initially as I felt the plants distracted from the lines of the architecture; although a part of me knew that the plants where the architecture too, I still felt I wasn’t able to capture them in my drawings in a way that blended together with the drawings that had no plants. I believe with more experimentation and time I could find a way to include the nature in the Barbican that would be a good addition to the animation, being able to represent more than the highwalks and rounded building references to the old castle. 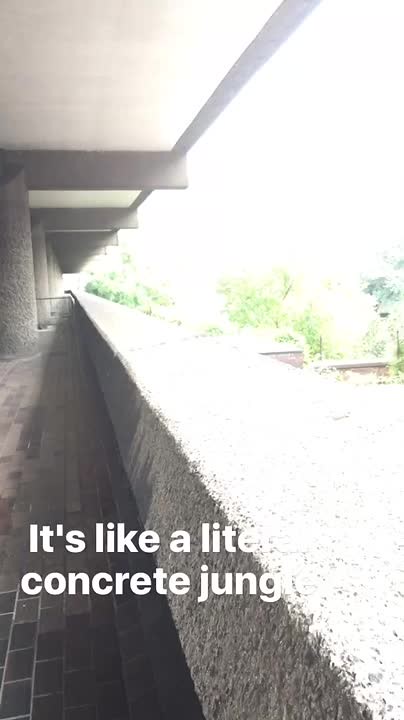 Forms in Space…by Light (in Time) is the 2017 Tate Britain Commission in which we invite a contemporary British artist to respond to the Duveen Galleries at the heart of Tate Britain. 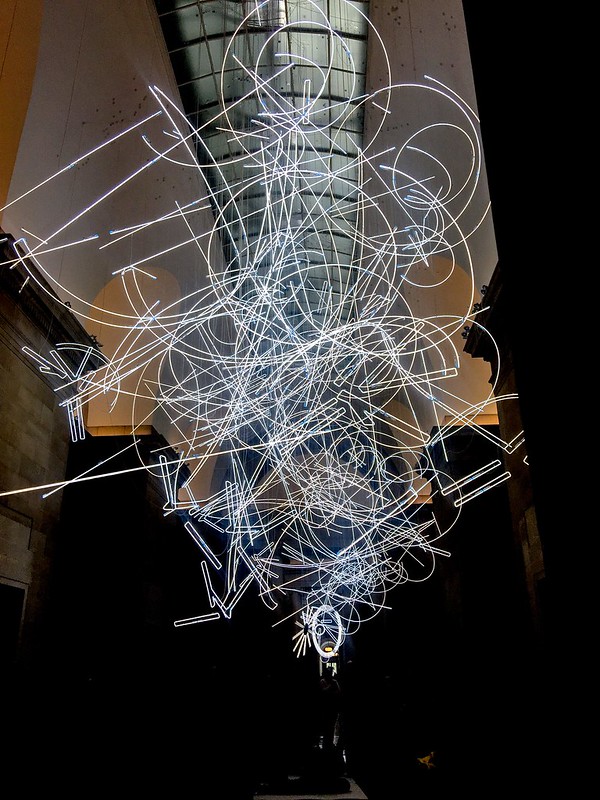 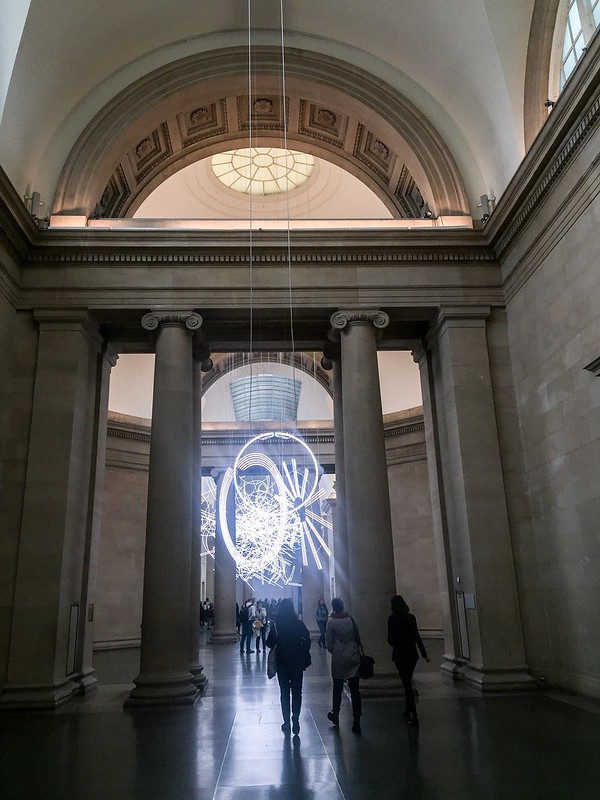 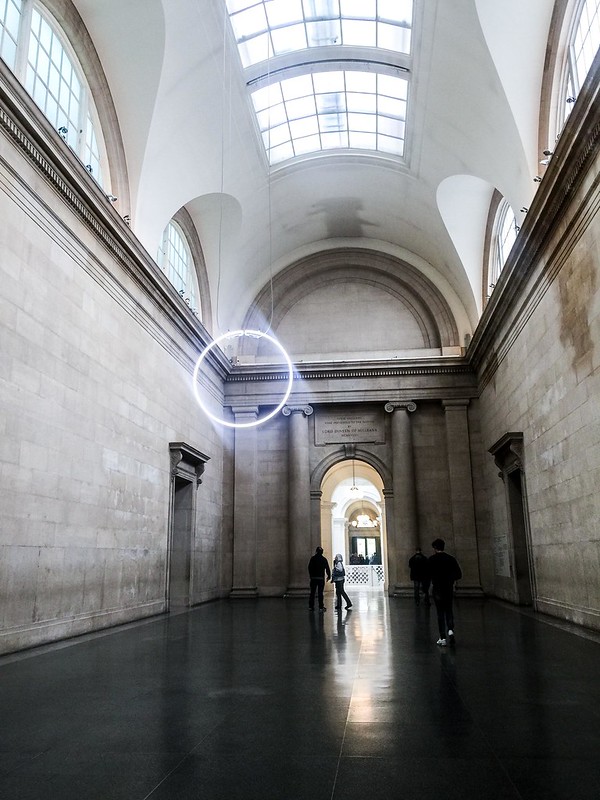 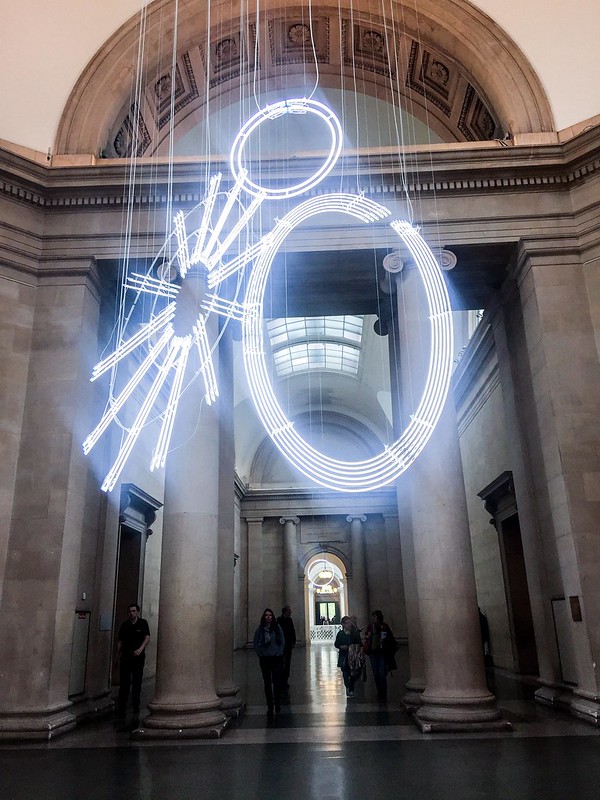 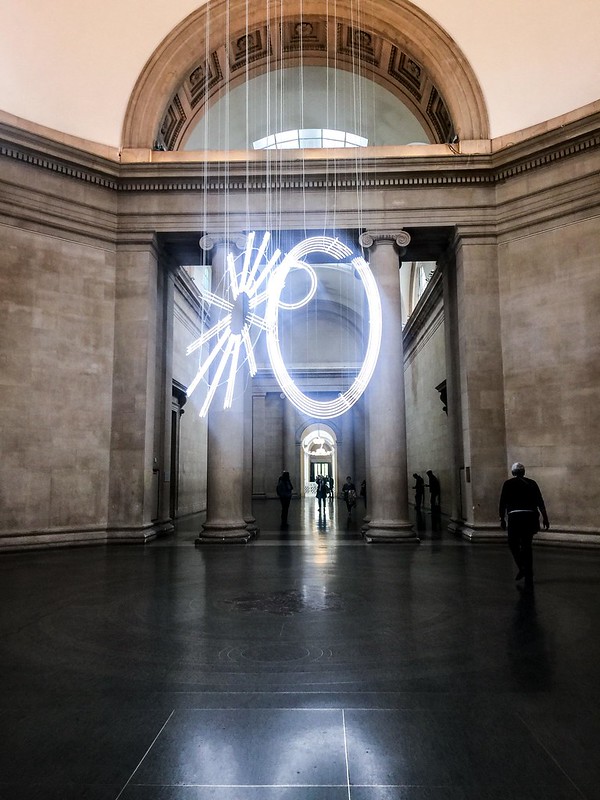 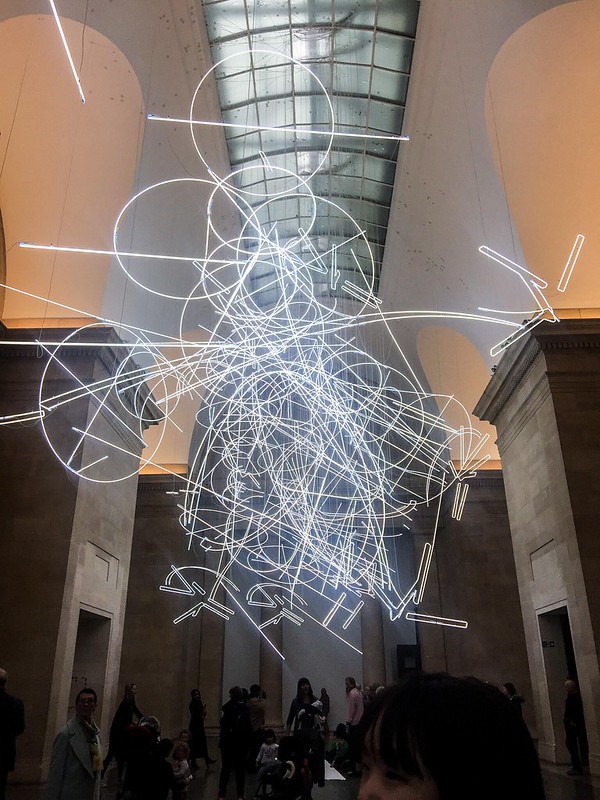 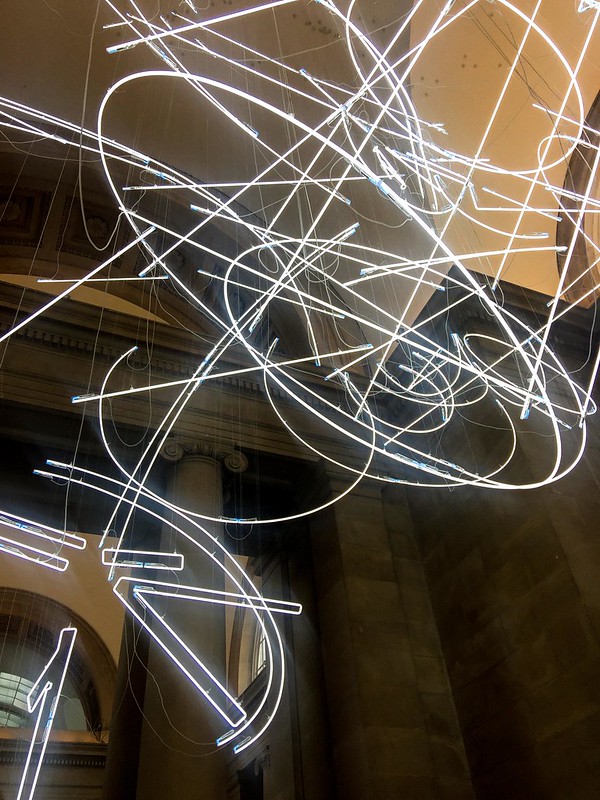 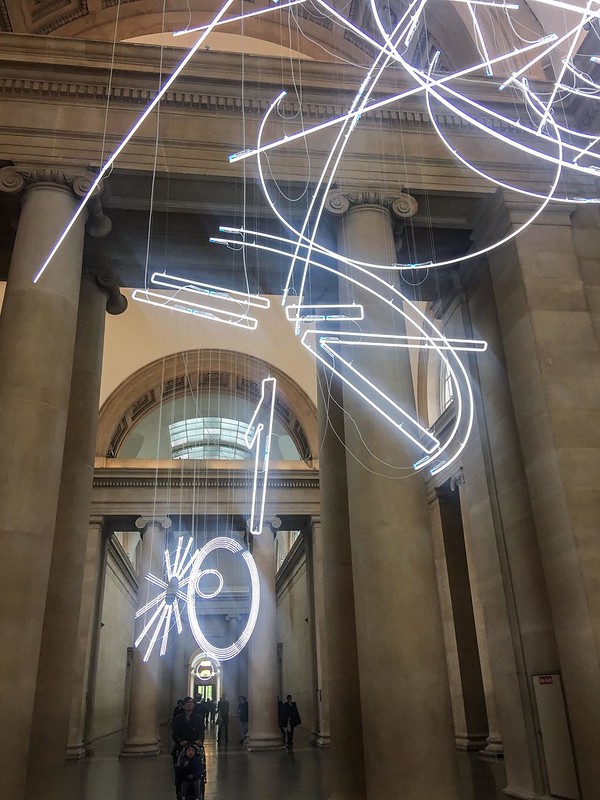 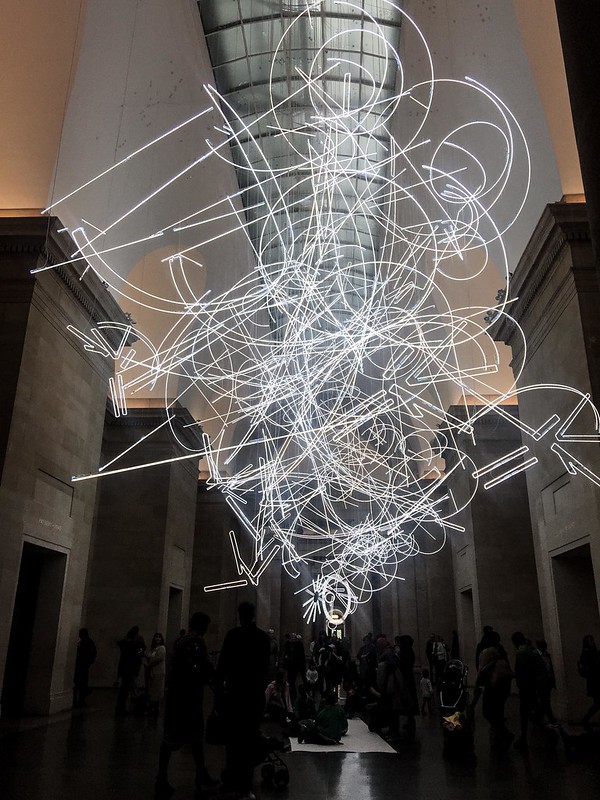 I heard about this exhibiton through a friend, I saw the photos from their visit and just felt an instant connection with the neon lines; flowing and expressive used in response to a space which architecture is made of straight lines and semi circles (Tate Britain). This is the core of my project, it really connects with my intentions and the brief we were given, “to tell a story of a location through visual means”. I just felt so inspired by the visit, to continue with my line drawings. The way the lights where presented and hung gave an feeling of movement and explosion; I took these values away and thought about how I could use them in my work.

Second project of the term. A choice between a Penguin book cover brief or the Zoo. I had what I thought was a brilliant idea for the zoo, so chose that project. However, the London Zoo (ZSL) had already created my idea, better than I would have; END_OF_DOCUMENT_TOKEN_TO_BE_REPLACED 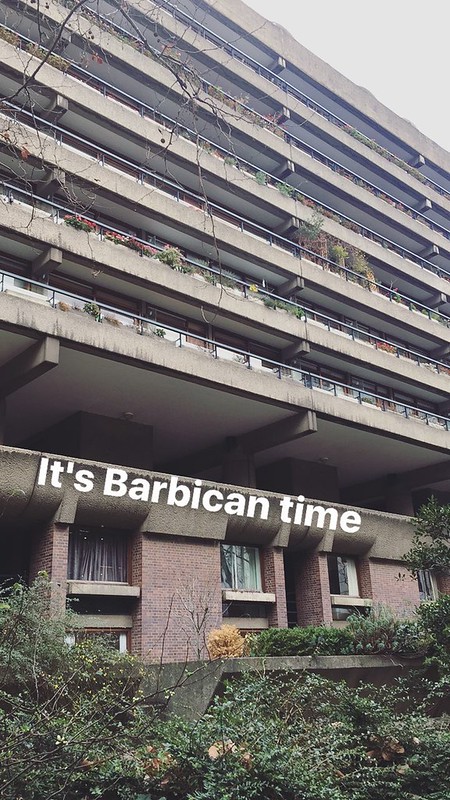 Beginning of spring term meant the beginning of our last set of projects. The first of which was the tutor briefs, END_OF_DOCUMENT_TOKEN_TO_BE_REPLACED

Lubricants and Literature, really the only thing about this exhibition I truly enjoyed was END_OF_DOCUMENT_TOKEN_TO_BE_REPLACED

Yup, last week our task was to visit 5 different exhibitions and relate them back to our work. Like we should be doing anyway if we were researching correctly… Anyway I’m just going to get on with writing about the 5 exhibitions I’ve just been to. We were only told to write about 2 but I took pictures of them all so they would be a waste if I didn’t explain everything.

Basically a show about how the vulgar is fashion and fashion is vulgar in every sense and term the word could possibly mean. It was a very large exhibition, one you could easily go back to see and will have missed one thing or another. Unfortunately there was to be no photographs taken, so I drew some of the Vulgar pieces I liked most.

Take this piece by John Gallian for Dior SS2003, the vulgarity is in the oversized coat and ruffles that do nothing to enhance the figure; yet something about the ensemble screams of class, affluence, excess and fun. Plus is was designed by a man in high places for a highly placed brand, therefore it must be in good taste to wear an ensemble such as this.

The outstanding theme was that taste is the very definition of vulgar. Saying whosoever can define “Good taste” has the right to condemn another to vulgarity. However, I believe, Adam Phillips goes further suggesting that The Vulgar can be celebrated within Good taste. Through the exhibit The Vulgar is described as something popular, copied, kitsch, made for general consumption, in short, anything that the lowly public can get their little, grubby, mass-produced hands on. Whilst understanding the only reason we do this is out of admiration, to be more like the upper class. So by the upper class dictating “Good taste” thus creating the vulgar that becomes high fashion. That’s why designers love vulgarity for if it wasn’t for the vulgar you wouldn’t have fashion.

Take Moschino for example; one of Jeremy Scott’s designs was in the exhibition because as a designer he takes inspiration from mass production and places it in his designs in a very kitsch style. However, his designs, though kitsch and mass-produced, are worn by the rich, then copied by super chains like Primark. 100% vulgar. 100% en Vogue. Literally.

Even though I loved the exhibition, what interested me was the gift shop in the Barbican. All the merchandise had pink tones despite there not being many pink garments displayed in the exhibition itself, and the advertisements for the show are red. This really puzzled me. Why have a gift shop that doesn’t reflect the gallery? Then I thought about it, paused, got tired, checked my insta feed, then thought about it some more. ‘Till it occurred to me that perhaps they were making a future statement about the current Vulgar. The current theme that popped up in this years SS2017 shows in LFW last September was PINK. All shades of pink, hints of pink, on their own and mixed together. Have the Barbican been really clever and spotted the micro trends from SS2017 that will soon become macro and vulgar, to prove the point of the exhibition? Or did they simply just think, it’s about fashion, that’s like girls stuff n pink pretty drawings? I hope it’s the former.

I absolutely loved the exhibition and I definitely feel like I learned lots about the fashion cycle and the relationship it has with the class system. A well curated, informative exhibition that beautifully uses the space given. Easy to follow but you will want a good few hours to look around and soak it all up; your ticket lasts the day so it is worth going mid morning and breaking for lunch, to return once your brain has had a rest. Then you can buy some not-so-vulgar, vulgar pencils!